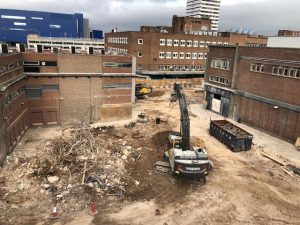 BSP Consulting played a significant role in the demolition of a 14-storey office tower block in the centre of Coventry.

The huge tower block had stood in the city centre since the 1970s, and its demolition will kickstart the £300m City Centre South regeneration in the city.

Using archives and other material, engineers from BSP researched the construction and make up of Coventry Point to advise Coventry City Council on how best to safely demolish the building.

Work to take the building down began in 2019 and has now been completed, with the tower block fully demolished.

BSP structures director Paul Elphick said: “More usually we’re involved in putting up buildings but it’s clearly important to known the structure and make up of a building prior to demolition, particularly one so large and in such a central location as Coventry Point.

We were very pleased to see that the whole demolition process went very smoothly.”

Coventry Point is the biggest floor by floor demolition in the history of Coventry, The giant city centre tower block has been removed as part of a regeneration effort of Market Way and the surrounding areas.

It has been demolished in time for the city’s year as City of Culture in 2021.

Here are a few more images of the Coventry Tower Block Demolition:

BSP Consulting have provided civil and structural engineering services on a range of projects throughout the UK, take a look at some examples here:

To see what else we have been up to recently take a look at our most recent newsletter: