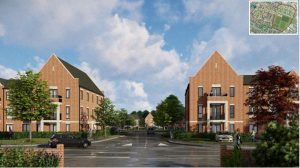 BSP is part of the team that is delivering a major regeneration scheme, Yorke Drive Regeneration Newark.

Compendium Living – which is owned jointly by Riverside and Lovell Partnerships – will provide around 300 new mixed tenure homes in the Yorke Drive area of the town.

There will also be a new sports pavilion and playing fields, new access road off Lincoln Road and improvements to the road network and environment to help make it a safer and better place to live.

BSP has been appointed as civil and structural engineer for the development, which is being undertaken by Newark and Sherwood District Council.

The phased development, which along with the building of the new homes also includes the demolition and redevelopment of 130 existing homes, as well as upgrading nearby facilities and infrastructure, is anticipated to take eight years to complete.

Work is expected to get under way on site in 2021.

BSP Consulting are also involved in the Castleward Urban Regeneration Scheme in Derby.

BSP engineers have been involved in the £100,000,000 regeneration plan for Castleward from concept.

The development is a joint venture between Derby City Council and Compendium Living, and spans five phases over around 20 years.

When complete, Castleward will feature 800 new homes, 35,000 sq. ft. of commercial retail space, a primary school and community spaces on the 30-acre site close to the heart of Derby.

The scheme includes a new boulevard which will link the railway station and city centre, lined with shops, cafés and offices.

In 2014 it became the country’s second development project to receive a BREEAM accreditation for its overall environmental sustainability ‘BREEAM Communities’.