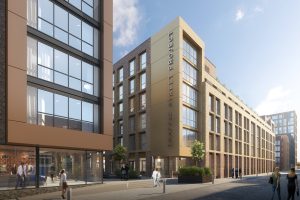 Work is getting under way on site on a 522-bed student accommodation scheme on the edge of Nottingham city centre.

BSP Consulting is the civil and structural engineer on the £35 million development being built on a brownfield site between Traffic Street, Waterway Street West and Sheriffs Way.

The Traffic Street Project is the latest project that the company has worked on for developer Jensco Group.

Comprising two blocks that are part three, part five and part six storeys in height, the accommodation is a mix of studio and cluster apartments. It also features 235 cycle spaces, including e-bike charging points.

The scheme was designed by CPMG Architects and is being built by contractor nmcn.

It will transform a derelict site on the south side of Nottingham city centre, close to Nottingham Train Station.

BSP Consulting structures director Carl Hilton said: “This is a major scheme on the edge of Nottingham city centre, which will breathe new life into this area, and BSP Consulting is proud to be involved in such a significant development that will benefit future students who come to the city.”

For more information about the Traffic Street Project click here:

Taka a look at a similar project that we have been involved with: