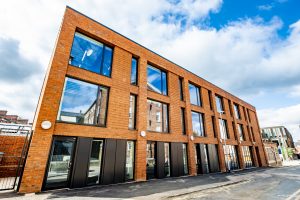 The £14m transformation of a Grade II listed former ironworks in Northampton into a creative hub has successfully finished with the Vulcan Works project completion.

Located in the heart of the city’s Cultural Quarter, the scheme was a combination of renovation and new build, providing 68 lettable units specifically aimed at start-ups and growing businesses within the creative industry.

It is expected to support up to 100 local businesses in its first ten years of operation, creating around 300 jobs for the local community.

Delivered by contractor Stepnell and West Northamptonshire Council, the Vulcan Works project was designed by architects Purcell UK and included the refurbishment of the former museum store and the creation of a new three-storey building, as well as constructing a new block on Angel Street to create the new office, studio and managed workshops.

SEMLEP has contributed £6.3million towards the development through the Local Growth Fund, and a further £3 million is being provided by the Ministry of Housing, Communities and Local Government (MHCLG) from the European Social Fund (ESF).

BSP Consulting has had a long-term link with the Vulcan Works site, having worked on plans for the development since 2014.

“It is great to see the Vulcan Works project completion,” said BSP’s managing director Carl Hilton. “BSP Consulting has been involved in proposals for the site for the past seven years and we are proud to have played a role in this excellent development which will breathe new life into an historic site in the centre of Northampton’s Cultural Quarter.”

“We were insistent on an extremely high standard of finish and that’s precisely what we’ve got. The transformation of this collection of buildings, some of which were in a terrible state of repair, is absolutely startling.”

Adrian said: “We are delighted to have completed Vulcan Works – a tremendous achievement for everybody involved. We are extremely proud of everyone who has had a part to play in bringing this historic building back to life, providing an exciting space for new businesses to grow and thrive, while still retaining some of the original features and characters of the former factory.

“As with all heritage projects we had to overcome a number of challenges, especially with its town centre location requiring the use of a tower crane for material movement.

As the project consisted of listed elements as well as new build, the interface between the elements had to be carefully considered and sequenced to ensure we got it right.

Due to its diverse nature of work and historical importance, the project required more than 70 specialist contractors to deliver the build and we are delighted with the end result.”

Here is a timpe lapse video of the Vulcan Works project completion: