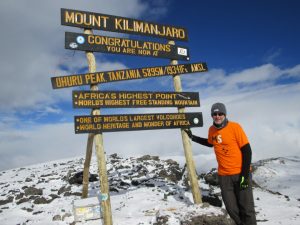 David was also part of a four-man team that raised more than £3,500 for Plumtree Cricket Club. Their efforts have kick started an appeal to develop a second ground at the Nottinghamshire club so the club can provide the best facilities for disabled cricketers and encourage more young players, and those who are less able, to take part in the game.

“It was the most amazing experience, and I am delighted and proud to have raised so much money for two causes that are very close to my heart,” said David. “I’m very grateful to those who sponsored me and donated to either or both fundraising efforts. A big thank you to everyone, including many firms in the construction, development and property sector in the East Midlands who supported my challenge.”

David, who jointly founded Nottingham-based BSP Consulting in 1999, was part of a 30-strong group of people who tackled Mount Kilimanjaro, which is 19,341 feet above sea level.

He undertook the challenge to raise money for MS research as his wife Pat has lived with the debilitating condition for around 20 years. As a member of Plumtree Cricket Club, he also wanted to support the appeal to expand club facilities and climbed the peak with three fellow cricket club members – Steve Daft, Patrick Shortt and Tony Westbrook.

“Physically it was a tough challenge but when we reached the top it was literally breathtaking. Not only are you gasping for breath due to the altitude, the view above the clouds is quite astonishing. It was stunning and well worth the climb,” added David.

BSP Consulting has its headquarters at Oxford Street, Nottingham, and branches in Derby, Leicester and Sheffield. It operates across the UK, providing a comprehensive range of services to all sectors of the construction industry from architects, project managers and contractors to developers and estate agents.