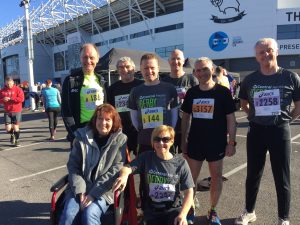 Employees were joined by associates and guests for the race, which began and ended at the iPro Stadium….just a stone’s throw from BSP’s Pride Park office.

First past the post from team BSP was communications consultant Marcus Duffield, who completed the run in 43 mins 34 seconds. He was closely followed by BSP MD David Sumner, who ran the distance in 45 minutes 10 seconds.

Next over the line was BSP director Clive Roddick who was running his first race since a knee operation at the end of last year. He recorded a time of 47 minutes 36 seconds.

He was followed by marketing consultant Peter Jubb in a time of 54 minutes 24 seconds, with PR consultant Louise Duffield, from Perfect 10 PR, hot on his heels completing in 54 minutes 52 seconds.

BSP business development coordinator Carrie Booth recorded a time of 56 minutes 18 seconds, with BSP guest Richard Flisher, from CPMG Architects, completing his first ever 10k in a time of one hour and 20 seconds.

BSP senior structural technician Gary Thomas, who was running as part of a wider fundraising effort in aid of Cancer Research UK, finished in a time of one hour five minutes and 28 seconds.