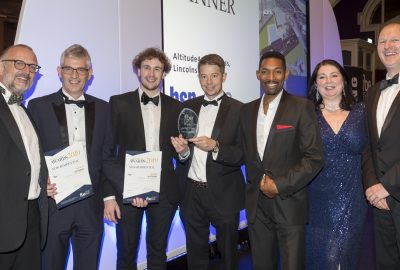 BSP is celebrating after a scheme jointly nominated with architects and sports business consultants LK2 won the Non-Residential Project of the Year Award at the fbe East Midlands Awards 2019.

The judges said: “Altitude44 was particularly appealing to the judges because of the positive impact it has had on both visitors and residents of Skegness. It is a highly attractive addition to Skegness’s famous seafront and encourages fitness and wellbeing as well as adventure and excitement. It is innovative and immediately became a landmark and a new focus for the local community as well as providing new employment opportunities.”

The attraction was developed by Magna Vitae, with KristallTurn the main contractor, and is billed as the UK’s highest urban high wire attraction. It features four giant-sized platforms within which sit 44 fun obstacles of all different shapes and sizes, and which have a distinctly seaside theme. A new café has also been created, as part of the attraction.

BSP business development director Jef Todd said: “We were delighted to be involved in creating the highest urban high wire attraction in the UK.

“Altitude44 was the first UK project by German company KristallTurm, which has a reputation for masterminding innovative and unique high wire and rope structures around the world, and we are thrilled that it has now been recognised at the fbe East Midlands Awards 2019. Well done to all the team involved in the project.”

The café at Altitude44 opened to the public in July 2019, with the high-wire attraction opening in early August 2019.